Posted on September 14, 2014 by Autumn Bernstein

I’ve spent the first week of this journey getting lost in Tokyo, in the spin-cycle of its subway system, the enticing maze of its side-streets, and the rabbit holes of its subcultures. I am officially smitten. Its like that feeling when you meet someone for the first time and feel like you’ve known them your entire life. Tokyo, where have you been??

I’ve been staying in a hip neighborhood called Shimokitazawa, which conquered my heart the first day when I got lost not 50 yards from the house I was staying in, and didn’t even begin to care until I was much further away than that. Just this week, Shimokitazawa was dubbed the coolest neighborhood in the world by Vogue magazine. Its not hard to see why: “Shimokita” is a few concentric circles removed from the chaos of inner Tokyo, close to all the action, but far enough away that you can sleep with the doors and windows open, a chorus of insects and frogs serenading you to sleep. The streets are narrow and go every which way, and they’re lined with funky old houses, crazy street art, vintage shops, and tiny cafes and restaurants. Everyone, young and old, has a beater bike which they use for shopping, dropping the kids at school, or calling out to their neighbors as they roll by. Bikes are left unlocked, bags are un-clutched. 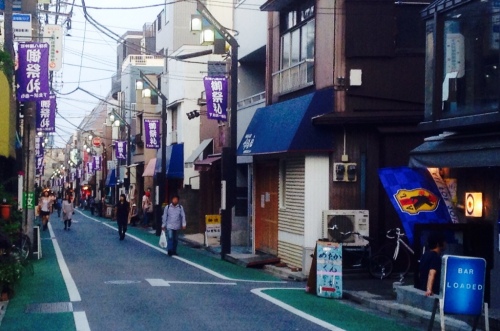 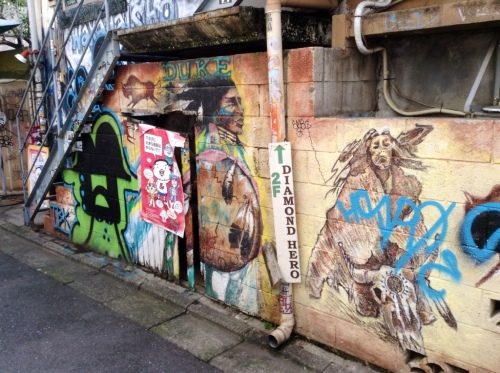 Street art in Shimokitazawa. I was surprised to see a lot of Native American-inspired art and fashion here.

While Shimokita is its own distinct vibe, it does have something in common with Oakland’s Temescal, LA’s Silver Lake and East Sacramento. These first-ring suburbs with their admixture of grit, walkability, access to urban centers, history and a dash of unkempt nature are having a moment. They are taking over the mantle of cool that used to belong to places like the Haight Ashbury, Harajuku and Greenwich Village before the corporate chain stores moved in. Online room-sharing services like Air BnB also make it easier than ever for tourists to experience neighborhoods like Shimokita, which doesn’t have much in the way of hotels.

How lucky for me to have found such a place at the start of my trip, thanks to the ever-helpful and in-the-know Ann Cheng. The “exotic familiar” was exactly what I needed this week. I was also lucky that my Air BnB house was shared with an Irish ex-pat named Justin who gave me great advice. He also has an excellent blog called Ikimasho! which I recommend if you are planning to visit Japan or SE Asia.

One of the highlights from my time in Tokyo was due to a recommendation from Justin: a visit to a temporary underground art happening called ‘Bction.’ The setup: an older high-rise office building in central Tokyo is slated for demolition, but they let a group of artists take over the entire building for several weeks prior. I visited during the final week before the building, and all its art, will be destroyed.

What they did with the place is astonishing. Just imagine if you walked into the office one day and it looked like this: 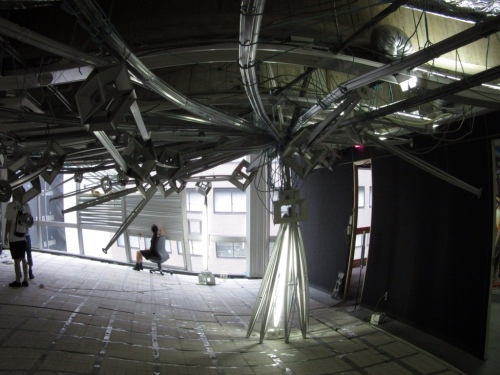 And my personal favorite –