Posted on September 27, 2014 by Autumn Bernstein

After my rough landing in Shanghai (see previous), I found myself a little intimidated. By the crowds, the chaotic streets, and the shocking contrast between Shanghais' glitzy trappings and entrenched poverty. You can't walk far in this town without tripping over a Gucci store or Porsche dealership, but there is also widespread poverty and desperation on a massive scale. To witness such suffering in this seemingly wealthy setting is disconcerting and a reminder of the paradoxes at the heart of modern China.

More selfishly, I immediately began to see myself as a walking dollar sign.

I told myself I was being paranoid. Just get out there and start exploring! But as I set out to see the sights in Shanghai, over and over again I found myself in strange conversations with people who seem too friendly, too interested. Was this just culture shock? Then, I learned I have was not paranoid enough.

My second day in Shanghai, I was walking along the Bund when two twenty-something girls asked me to take their photo in front of a famous building. This had happened to me many times already that day, sometimes innocently, and other times it felt like something weird was going on. This time, I didn't get any red flags and we started chatting and I immediately took a liking to these two. They were from a small city in northern China (Harbin), they were visiting a friend who had moved to Shanghai, they had majored in English. We were strolling in the same direction, so the conversation continued. After a few blocks, they said they were ready for a cup of tea and asked if I wanted to join them… a good chance for them to practice their English… the weather was gusty and rainy and a cup of tea sounded great… soon one cup of tea turned into tasting a few different varieties of tea — the waitress was so insistent! — but we were having a great conversation, talking about our lives and our families and what it was like to be a woman in the changing, modern world.

We were done drinking tea, but maybe we should buy some? For gifts? After Shanghai, I'm planning to visit some elderly Chinese family friends in Nanning, so yeah maybe tea would be a good gift… the prices seem a little steep… but maybe I'm getting my exchange rates mixed up … the bill was huge, and confusing, one of the girls wanted to gift me some tea.. . Before I know it, we're saying our goodbyes and I'm walking away in a daze, having just dropped something like $150.

Its such a culturally-inappropriate cliche: I was shanghaied in Shanghai!

Later that day, the remants of a typhoon passed through, dumping rain, and the streets were filled with nasty water. Soaking wet and totally freaked out, I retreated to my hostel and started researching the fastest, cheapest way to get out of China. Express train to Hong Kong? Direct flight to Thailand? Websites are not working. Not just Facebook, but also Google and the New York Times. Argh!! Where am I?!!

After the storm passed and I got a good night's rest, I started to de-freak. Gradually I started to make my way out and about again, this time more cautious about money and suspicious of overly friendly people. I wandered around the French Concession, talking to shop owners and visiting art galleries. I frequented the same restaurants, learned the menus, practiced my Chinese with those who had the patience to listen.

After one week in Shanghai I was once again wandering freely, still cautious but immersed. Highlights of my explorations were the exploring's Shanghai futuristic urban planning vision, the Jing'an sculpture garden, and wandering the French Concession and People's Park. Here are some photos – 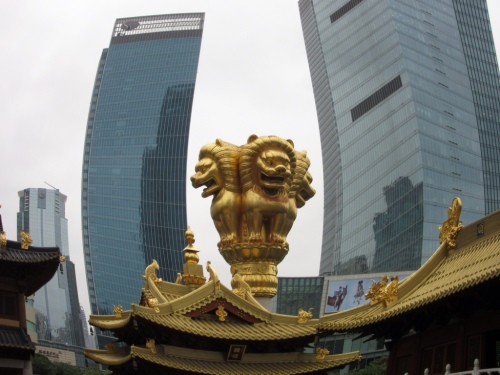 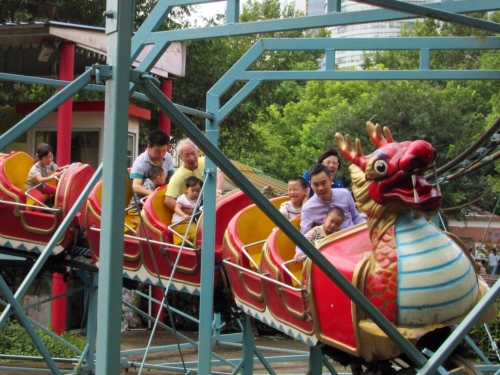 Riding the dragon in People's Park. China's growing middle class is enjoying the good life in Shanghai, with its redone parks, new metro system and many, many shopping malls.

Fashion shoot outside the Gucci store in Shanghai. There is no shortage of bling in Shanghai. 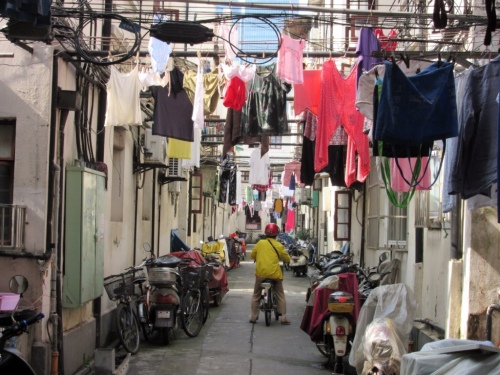 An alley in the French Concession is a reminder that many people in Shanghai are NOT living the bling life.

Cigarettes and conversation on a Sunday afternoon in People's Park.

Shanghai's government has an ambitious vision for their city. Already, Shanghai has a Maglev train that goes 420 km per hour to/from the airport and a huge metro subway system that was just built in the last 10 years (it reminds me of what is happening in Los Angeles right now).
But there's much more they have in mind. The futurist vision is on display at the Shanghai Urban Planning Exhibition Center. Situated in People's Park, this quasi-museum displayes a potent mixture of planning and propaganda.

In future Shanghai, we will all be green people.

There are strange paradoxes in future Shanghai, like this low-density bucolic sportscar setting. 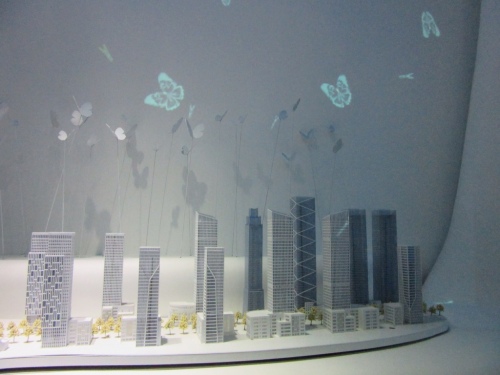 In future Shanghai, watch out for the giant butterflies.

I watched this 20-minute video about future Shanghai's transportation network. Strikingly, there were no photos or mention of bicycles, despite the fact that there are millions of them in Shanghai.

Future Shanghai already exists in some places, like the Pudong district. Built from scratch in the last 20 years, Pudong is home to East Asia's tallest skyscrapers and feels you've walked into a CAD drawing in Peter Calthorpe's office.

When CAD drawings come to life: Strolling through the (actual) future Shanghai.

But there are also strange reminders of the past. In one of the glitzy mall areas, a small, old-fashioned building stands out in a sea of glass and advertisements: it is an apartment where Chairman Mao briefly lived in Shanghai, now immortalized as a museum. 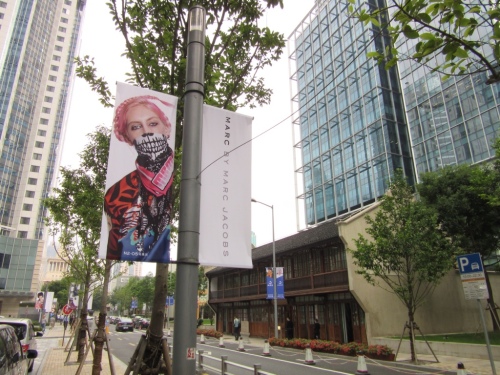 Malls and skyscrapers surround a house where the Dear Leader once lived.

In the end, I made my peace with Shanghai. I was fascinated by its beauty, its paradoxes, its history and, ultimately, the openness and ambition of its people.

5 Responses to Shanghaied in Tomorrowland